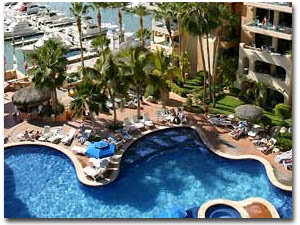 Remarks:
"We made transportation plans with the concierge of Marina Fiesta prior to arriving so we did not need a taxi. However, upon arrival there are booths set up with people attempting to get you to sign up with their hotel or resort for a timeshare tour. They will offer you all kinds of goodies if you schedule with them but if you don’t plan to spend your vacation visiting timeshares, I suggest arrange transportation with your concierge beforehand. He was waiting outside of the airport holding a sign with our names on it. He was very courteous and helped us get our bags in the van and offered us all water (there were five of us). Once we arrived at the hotel, the conscierge I’d emailed about the transportation (Carlos) greeted us by name. I was impressed from that moment forward. Check in was painless and fairly quick. The bellhop (or whatever they are called in Mexico) helped us get the bags upstairs to our room. The A/C was on already so we were met with a nice cool room.

The Room:
The room was a one bedroom unit that actually locked out the living room incase you wanted privacy from the kids. There were two bathrooms with showers; a kitchenette with a two burner stove, refrigerator, microwave and a sink. There was a dining room, a living room with a king size pull out bed. There were two balconies; one I called the sun deck with two beach type lounge chairs and a hot tub and another in the front of the unit facing the marina. We had a larger unit because there were five in our party. The room was nicely decorated (I hate floral furniture and the couch was floral but the furniture was in great condition and the room was very nicely decorated very classy). The kitchenette over all was nice. The kitchen counter needs to be replaced but overall it was a very nice unit and I would visit again if the opportunity presents itself. The beds were extremely comfortable which was a surprise as I expected it to be hard, which is usually the case.

Service:
We did ask the hotel staff to remove the items from the refrigerator, and they actually asked me a couple of times if this had been done, unfortunately they didn’t remove the items until it was time to restock and the restocker noticed all of the items on the counter. However, one day we asked not to be disturbed in the bedroom by the housekeeping staff and they closed the door to the bedroom and did not disturb. We realized all of the towels were on the floor in the bedroom bath and asked they come and replace them (later that night). They were at the door in less than 10 minutes, closer to five. This resort knows how to serve a customer and they are very good at it. They have a grill by the pool area and you can order any type of food on the menu and they’ll bring it right there to the pool to you. Same with the waiters on the beach in front of the hotels. You can order just about anything out there. Be sure to tip them well because they only work for tips. I was also told that you don’t tip the taxi drivers. I always gave them a little something. I tipped just about everyone because I didn’t want to offend anyone. One waiter at Ole Ole, a restaurant on the marina, made the mistake of saying is that all to my husband (he was slow, rude, and returned the wrong credit card to us when we were ready to leave and it took him forever to bring our card to us. I spoke to the manager about him). I made sure to tip the maid but I wish I had tipped her more of all of the people I tipped, it was the maid who I wanted to give the most too. She kept our room sparkling and she washed our dishes every day we were there a pleasant surprise to some of the other resorts.

Timeshare Warning:
This is the timeshare capitol of the world (I think). They are going to hit you up as soon as you arrive in the airport. I suggest skipping those at the airport. There will be a few representatives in the lobby of the resort who are much nicer, and not as pushy as those in the airport. One of them is for the sister resort (the name escapes me) and another is for the Grand Mayan Resort. We did both of them. They had great offers and we were trying to save money. We were offered half off of all of our activities while there if we only tour their resort and for the Mayan we were offered $200 cash and $100 resturant coupon. The first was pretty easy going and actually accepted our No when we said no (of course we had no plans to buy a timeshare we just wanted the perks). The Mayan was another story. Unless you are firm like I am and can handle the pressure, I don’t suggest going on this tour. They are outright rude if you don’t buy with them. We also did another while we were on the beach and received $150 for their tour and it only lasted 1 hour which was by far the shortest of the three. After the Mayan, I retired from touring timeshares it was exhausting. If you want to make a little money and can stand up to the pressure, you can get all kinds of things. Another couple got a free $450 fishing trip. You just need to know what you want to do up front and make them list everything on your invitation otherwise you will be paying full price for any activity not listed.

The Resort:
It looks exactly like the pictures on the internet. The pool look bigger in the pictures but it is a nice pool. It closes at 8pm every night. There’s a nice poolside bar where you can sit in the pool and order drinks or sit outside the pool and order drinks. There is also a bar in the lobby. The resort is well kept and clean. They kept the public restrooms emaculate. The beach is about a five minute walk from the resort and there are two ways to enter one is to go around the marina and the other is to exit the front of the resort and make a left turn then a right at the first corner. This way is quicker and takes you directly to the beach chairs whereas the other way takes you out of the way and you have to walk about a quarter of a mile to get to the beach chairs.

Cabo San Lucas:
Wow! I am impressed. I expected it to be dirty. I’m not really sure why. We went to the Zoo twice while there, which is a local club that most party people go to while in Cabo. Very nice. The shopping in the marina area is expensive, but what do you expect. You can pick up some nice trinkets to bring back. There are some nice restaurants also. They have a Ruth Chris (which was waaaaaayyyyy too expensive for me but we went anyway. For four of us to have steak, a side, a bottle of water and one appetizer of onion rings, we paid $209.00). I almost cried, but I remembered all of the timeshare money we’d received and decided it wasn’t worth crying over! We stuck to the smaller less expensive restaurants after that night.

OVERALL:
If I were to rate the Marina Fiesta between a scale of 1 to 10 it is definitely a 9. My reasoning for a 9 and not 10 is that darn kitchen sink! I think they’d make it to a 5 star resort if they’d do a little renovating. It’s a very pleasant place and I would return in a heartbeat!" – Kimberly from San Antonio, Texas

Villa la Estancia Cabo San Lucas
Villa del Palmar Cabo San Lucas
Royal Solaris Los Cabos
Riu Palace Cabo San Lucas
We use cookies on our website to give you the most relevant experience by remembering your preferences and repeat visits. By clicking “Accept”, you consent to the use of ALL the cookies.
.
Cookie SettingsAccept
Manage consent