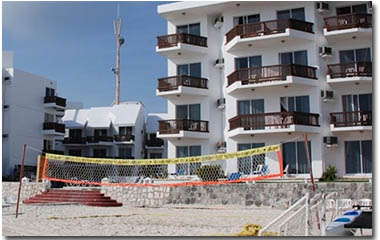 The Imperial las Perlas Hotel offers a 2-star, Mexican-style beach-front hotel. The Imperial Las Perlas Cancun offers basic, budget accommodations. This Cancun Hotel is a series of six separate buildings, each with 3 floors, that surround a freshwater swimming pool. The hotel is on a white sand Cancun beach, with calm water, that is great for swimming and water sports.

Remarks:
"We are not fussy people. We always stay in 3 star hotels and all we want is a basic room that is clean and food that is tasty. We were put in a terrible room the first night (we arrived after midnight and the lobby itself was scary. Poorly lit, dirty sofas etc.) . Our room had no lamp shades, mold in the bathroom, electrical wiring held together with tape, ripped curtains hanging off the rods, filthy upholstery etc. rusting stove elements, a fridge that didnt work and the phone didn’t either, torn bedspread, no balcony, etc. The front desk service was absolutely the worse! A very blank look, no smile and basically were to suck it up or stay somewhere else. The next morning we hauled our luggage into the lobby and made a stand and were given a better room…at least it was clean and had a balcony so we could air out the room. The maid did a great job at trying to keep the room clean even though the plaster was falling off some parts of the wall. The balcony railing was haphazardly put together so we were always careful not to lean against it. The buffet food was good but lunch was the same as dinner which was the same every day of the week. Lots of lettuce and tomato, very little fruit except for breakfast, chicken, pork, fish were good. The employees were not very friendly except for one of the bar tenders who was a great guy and one of the waiters was really nice. Several tour people and timeshare people have desks in the lobby and do hassle you the first few days but if you make it clear that you are not interested they eventually leave you alone. The timeshare people leave you a note telling you to check in at the lobby… The beach had nice sand but there was a lot of seaweed on the beach near the water. If you wanted a decent lounge chair you had to be up at 6 to put your towel down. Two elderly women had their towels stolen and had to pay $50 when they checked out because they didnt have their towels. They reported it right away but were told they had to pay up. The pool was very small but clean. Quite a few topless sunbathers so you would have to decide if you have small children. We loved Mexico, but our experience at this hotel was not very positive. We missed the friendliness of the Mexican people that we experience in Manzanillo. Lots to do and lot of shopping here" – Lisa, from Saskatoon, Saskatchewan, Canada
GET THE LATEST!
eNEWSLETTER
Subscribe Now!