Many of you might have discovered the exotic Goa through its incredible beaches, captivating live night parties and thrilling adventures. However, sun, sand, beach and party would not be able to satisfy your senses completely unless they are accompanied by authentic, delicious and incredibly rich Goan cuisine. The culinary delights of Goa are one of the main reasons why so many tourists are attracted to this glorious destination. So this time let’s go Goa for its tantalizing dishes and drinks.

Every famous authentic cuisine always has a vibrant history in its background and the same thing applies to Goa. Goan cuisine is outright different due to its rich and diverse cultural heritage. Over the centuries Goa got influenced by the foreign invaders as well as native cultures and that is clearly reflected in its cuisine. The Goan cuisine has Hindu roots; however, the centuries of Muslim rule coupled with a prolonged 451 years of Portuguese colonization with its Catholic influence have created an exotic cuisine offering a unique combination of delicacies, spices and flavors. In later years modern Goa chefs created fusion dishes that tourists and the hippies discovered and enjoyed. 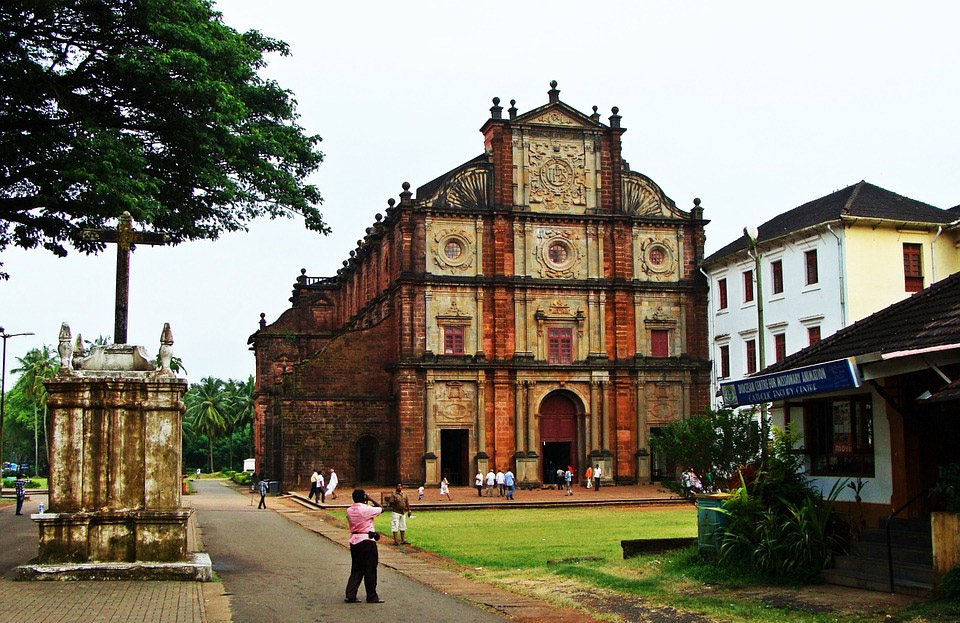 Primarily, two religions dominate the Goan food, Hinduism and Catholic Christianity and the dishes are distinct from each other. Christian Goan cuisine adopted more of Portuguese, Konkani, and South Indian cuisines and used more of pork, beef, and chicken in the dishes.

Hindu cuisine, on the other hand, is mainly Lacto-vegetarian. More vegetables like pumpkins, gourds, bamboo shoots, roots, and lentils are used along with spices like asafoetida, mustard, fenugreek, curry leaves, and urad dal. Less onion and garlic are used, and the coconut oil is the medium of cooking. Hindu Goan cuisine uses tamarind and kokum whereas Christians use vinegar to add a tangy flavor.

The east meets west in culinary Goa. However, the fundamental thing is prevalent in all the dishes that ingredients and spices used should be fresh and the food that is served should be tasty and fresh.

Located along the west coast of India on the Arabian’s Seashore, Goa incorporated all the nature’s supplies to create its heavenly meals. Goa is a rich source of seafood, rice, coconut, vegetables, meat, pork, local spices, and flavors. Above all the tropical climate makes the spices and flavors intense. The fish, coconut or coconut milk, cashews and spices including jaggery, kokum, tamarind, and red Goan chilies make the dishes famous with distinct sweet, sour and spicy hot flavors.

Kingfish is the most common fish in Goa. Seafood, mainly fresh varieties like prawns, tiger prawns, pomfrets, lobsters, shark, tuna, mackerel, doumer, crabs, ladyfish, clams, oysters, squids, mussels and other dried and salted fish are the heart of Goan dishes. The fries, curries, soups, pickles made with these create some fabulous mouth-watering delicacies.

Goans are not only food-lover, but they also adore cooking. Goan dishes when cooked in traditional ways using clay-pots on firewood, a grinding stone varn to grind spices, a hand-mill dantem for grinding cereals, and brass utensils for preparing desserts, create unique tastes and aroma with an additional smoky flavor that make them incomparable. The platter includes fish, prawns, chicken, beef, sausages, and a variety of vegetarian dishes.

Popular Goan Dishes You Should Not Miss

Three basic things i.e. fish, curry and rice, are staples of heavenly Goan meal. Here we go with some of the delicacies of Goa including prawn balchão and sorpotel which are famous around the world.

True Goan’s are never tired of Goan fish curry. It is the staple diet of every Goan. The masala paste which is the base of this unique yellowish-red tasty curry includes onion, garlic, ginger, tomatoes, turmeric, Kashmiri red chilies, coriander seeds, cumin seeds, mustard seeds, green chili, and coconut. Kokum or raw mango or bimli add a tangy flavor. Any sea fish like Pomfret, Rawas, and Kingfish can be used in this curry and served with rice.

This famous fiery dish of Goa is prepared with prawns and spice vinegar paste. It is a kind of pickle that can be refrigerated and used for several days. The spices like onion, garlic, ginger, tomatoes, turmeric, dried red chilies, cumin seeds, mustard seeds, cinnamon, clove, sugar, and vinegar together create the magic. It is served with plain boiled rice.

This is my favorite rich Goan stew prepared with pork, beef or mutton liver that is cherished worldwide. The parboiled meat is cooked with a red smooth masala paste consisting of the peppercorns, Kashmiri red chili, ginger, garlic cinnamon, cloves, cumin seeds or powder, and vinegar. The pork blood (optional) also added to this pork item.

Pork cooked with vin or vinegar and ahlo or garlic with Portuguese influence. Later the name changed to vindaloo as aloo or potato goes into this hot dish. The red masala made from Kashmiri red chili, ginger, garlic, pepper, turmeric powder, cinnamon, cloves, cumin seeds or powder, and vinegar go with the pork.

This is the most famous and delicious dessert of Goa. This multi-layered cake is made from flour, coconut milk, egg, sugar, butter, jaggery, and ghee, especially during Christmas. Traditional Bebinca can have seven to sixteen layers. The use of caramelized sugar and the roasted first layers make this mouth melted sweet item one of the gems of Goan cuisine.

Lastly, the popular restaurants where you can enjoy the unique flavors of Goa are:

Hope I have given you enough reason to plan your next trip to Goa to discover its lip-smacking culinary treasures.

1 thought on “Goa is Heaven For India Travel Foodies”