George Oberle is a second generation travel industry veteran. He owned and operated two mid‐size travel agencies over a 20 year period. He was a webmaster and SEO specialist at a large regional travel agency for five years. In 2011 he created and coordinated the Travel Blog Project which guided 230 travel agents through a 100 day online marketing effort encompassing blogging, social media and search engine optimization for websites. George started the LinkedIn group Travel Content Marketers. He is now a Silicon Valley based webmaster and entrepreneur.

I recently traveled with a group of fans from the San Jose Giants minor league team to visit the Baseball Hall of Fame in Cooperstown, New York. Visiting the Hall of Fame has always been one of the top items on my travel bucket list. I can describe the entire experience in one word: History.  You’re engulfed in the history of the game of baseball, the Cooperstown area and also of our country.

To get to Cooperstown, we flew into Albany, New York which is about a 90 minute drive.  Candidly, this was my first trip to Upstate. I have visited New York City a number of times but this area north is a world away.  I was blown away at the beauty of Upstate and the slower pace of life. This is gorgeous country with really old towns featuring buildings from the early 1800’s all set in a hilly landscape with a lot of lakes and meadows.  In short, the drive to Cooperstown is beautiful and one you will really enjoy.

Upon our arrival in Cooperstown, we checked into our hotel The Tunnicliff Inn.  Talk about history! This is a continuously operating hotel established in 1802.  The spiral staircase to the third floor is out of a different era. When I got to my room on the third floor it was classic early American. I could envision where the bowl and pitcher used to be along with the spittoon aside.  My suspicions were confirmed when I found out from the manager that the bathrooms were added to the rooms in 1923. The hotel includes a generous breakfast buffet and has a restaurant and bar below.   For history buffs and people who enjoy early American history and style, I totally recommend the Tunnicliff Inn.

The Baseball Hall of Fame was an incredible experience. First let me set the scene. I am a lifelong baseball fan and who lives my life judging people by their substance and NOT the color of the skin. So with that being said, I was actually somewhat apprehensive in visiting the museum as I knew that half the best players played in another league prior to 1946 when Jackie Robinson broke the color barrier.  However, I was absolutely blown away how the Hall of Fame celebrates ALL players in all the leagues.  For example, as you enter the Hall there is a full corner exhibit dedicated to Buck O’Neil a star player for the Negro League Kansas City Monarchs and first African-American MLB Coach.

I also have an entirely new view of “The Babe” and his impact on the game.  Prior to my visit to Cooperstown, I saw Babe Ruth as the home run king, the Sultan of Swat.  However, I now understand the larger picture.  The infamous 1919 Black Socks scandal where players were compromised by gambling interests and were found guilty of fixing the outcome of the games almost ended the league. People were not attending the games and the teams were becoming insolvent. Why would you sit through 9 innings of a game that was fixed? You wouldn’t and people didn’t.  The game was going broke quickly. In 1920 the Babe was traded to New York Yankees and captured America’s heart visiting orphanage schools during the day, hitting home runs in the afternoon and partying until the wee hours.  The Hall portrays The Babe as the one who saved baseball.  While I was taking in Ruth’s exhibit, I came to the realization that Peter Rose will never be inducted into the Hall of Fame while he is alive. His ties to gambling and betting on the games while he was a manager could have once again brought the game’s demise and the Hall is very aware of this. Sorry Pete!

Other notable exhibits were for Henry Aaron who broke Ruth’s home record.  The impact Aaron had on the game with his abilities and as a true gentleman ambassador of the game cannot be overstated. 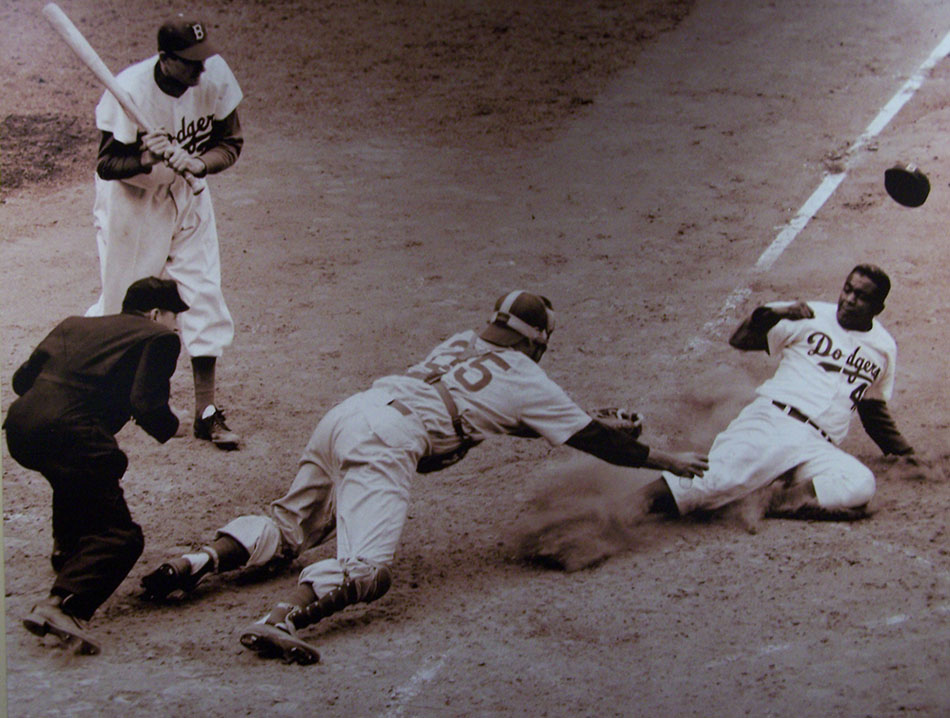 Jackie Robinson Sliding into Home for the Brooklyn Dodgers

The most moving exhibit I encountered was for Jackie Robinson who broke the color barrier when he became the first African American to play in the Major Leagues with his incredible perseverance and emotional restraint. It made me realize how far we have come, but also how far we have yet to evolve as a society.

My childhood hero was Willie Mays of the Giants. As a baby boomer, I only knew of Mays while he was a San Francisco Giant.  I came way realizing I only saw an older version of the player and the young Willie Mays of the New York Giants was beyond anything I use to watch at Candlestick Park in San Francisco when he was in his later years. He was an incredible talent and a true gentleman ambassador of the game as well.

There are T-shirts that are embroidered with  “Cooperstown is a Drinking Town with a Baseball Problem!”  When the sun goes down, Cooperstown is a delightful place with lots great restaurants and bars to enjoy and discuss what you observed during the day. We dined at Nicoletta’s Italian Cafe for an incredible feast. The chef is a character and loves mingling with the guests and the menu is reasonably priced. If all you need is a “cold one” then stop by Council Rock Brewery. If you need something a bit stronger, consider the Cooperstown Distillery where you can sample their unique Bourbon in many different flavors and drinks.

On Sunday we attended Baseball Mass. There are a number of different Churches of the different denominations.  Inside the Church Sanctuary the Father paints an area with the World Series team winners’ colors.  Prior to services, the Father likes to mingle to get to know the tourists.  While we all were sitting in the pews one of the people in our group asked the Father how many coats of paint it took to cover the Orange and Black of the SF Giants!  We all shared a laugh with the Father and he was laughing right along with us. It was a great moment.

I can cross Cooperstown off my travel bucket list and would recommend this to any baseball fan and history buffs.  If you are like me and enjoy both, you will be in heaven.

George Oberle is a second generation travel industry veteran. He owned and operated two mid‐size travel agencies over a 20 year period. He was a webmaster and SEO specialist at a large regional travel agency for five years. In 2011 he created and coordinated the Travel Blog Project which guided 230 travel agents through a 100 day online marketing effort encompassing blogging, social media and search engine optimization for websites. George started the LinkedIn group Travel Content Marketers. He is now a Silicon Valley based webmaster and entrepreneur.

View all posts by
George Oberle
GET THE LATEST!
eNEWSLETTER
Subscribe Now!