Charlie Svensson is a freelance writer. Having visited close to 60 countries, he writes mainly about travel. He has created several travel guides that focus on helping people make an informed decision when choosing where to travel.

Sweden is an enigmatic place to most travelers. There’s a view that all Swedes are blondes with shrewd attitudes to a relaxed life balancing that with a sense of style, design and an attention to immaculate detail. To discover that for yourself, to determine its veracity, you have to visit Sweden. Nowhere else will you get that sense of what it means to be a Swede than in the capital, Stockholm.

There is a fantastic array of sights and attractions in Stockholm, from world-class museums and historical features to modern urban entertainments. An unmissable area is the Old Town.

Stockholm’s old town is also called the Gamla Stan. It is a very old area, full of cobbled streets with many of the buildings erected in the 17th and 18th century although the town was established originally in 1252. Visiting Gamla Stan is an experience because it is one of the largest and best preserved medieval city centers in Europe.

Here is my countdown of the top 7 sights of Stockholm Old Town leading to the most interesting. 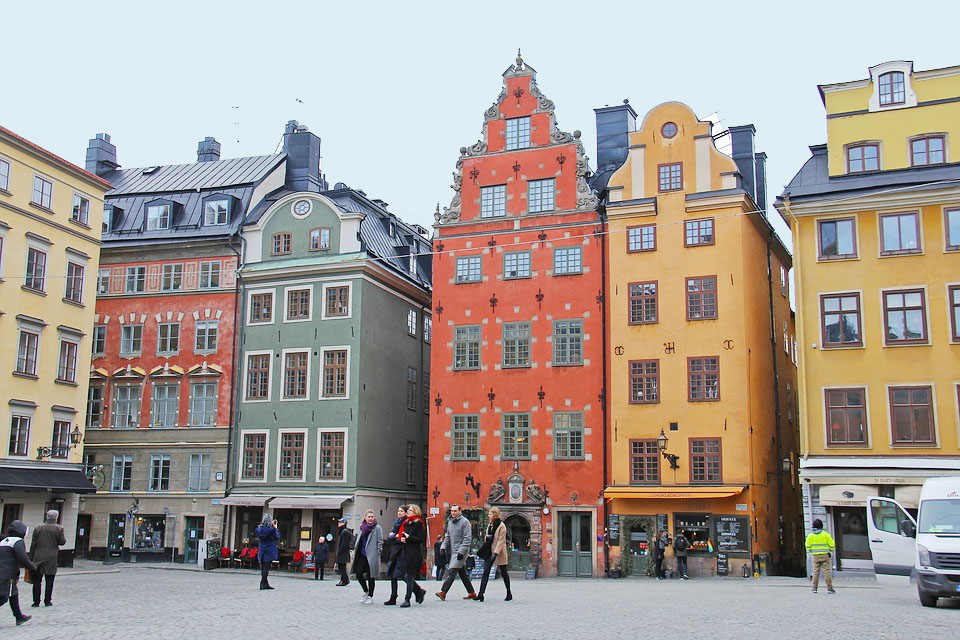 A fair amount of history has happened in this big square. In 1520, Danish conqueror Kristian II rounded up 82 Swedish dignitaries, and had them all beheaded in the square in front of massive crowds of people. He killed the most powerful people who opposed his rule.

Stortorget is lined with houses built in the 17th and 18th century, all that used to be owned by wealthy merchants who often had their shops on the ground floor. The square was the political heart of town until 1732 when they moved the city hall to Bondeska Palace.

These days, it is a tourist attraction full of people, benches and cafes (be prepared for high prices!) Make sure to dress appropriately because the area has that old habit of having a nice hot sun and a nippy cold breeze during fall and winter. 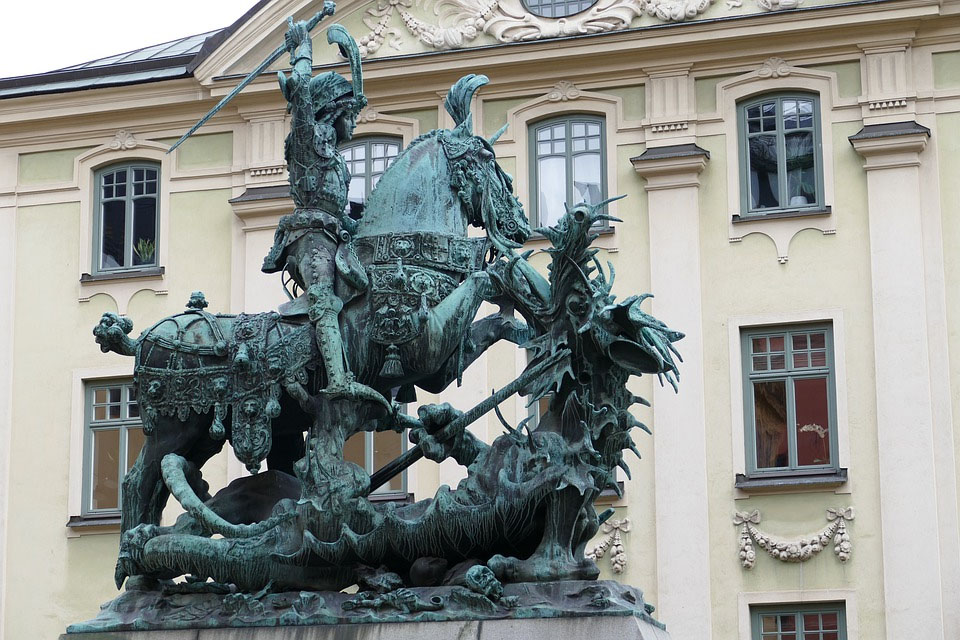 The famous and original St. George and Dragon statue (dating from 1479) sits in Storkyrkan, the oldest church in Stockholm. The original is carved wood but there is a replica that sits on Köpmantorget. Visit the replica and you will see it is made of bronze, which is why if you zoom in with your camera, you will see the weird turquoise tinged fluid that seems to have seeped from it. The statue was inaugurated on the 10th of October 1912 commemorating the Battle of Brunkeberg (10th of October 1471) for which the original was commissioned.

The weird thing about this statue is that it looks brilliant, but it photographs horribly unless you have broad sunlight. The sad irony is that the area is not prone to bouts of excessively bright sunlight, so many online photos do a poor job of depicting how lovely this statue really is. Though you cannot tell from looking, the dragon has both male and female genitalia. This is not an ancient blow for the Woke trolls, nor is it a statement on gender politics. It actually symbolizes that evil can self-replicate if left unchecked. 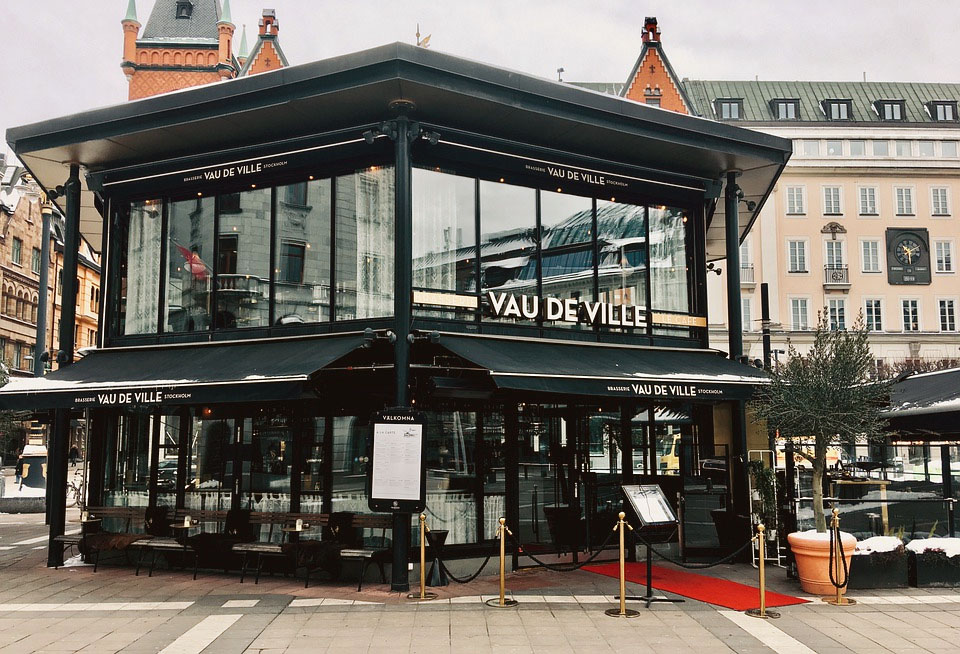 Yes, they are expensive, and yes they are overpriced, and yes some of them are very unimpressive, but trying out one of the eateries or cafes is par for the course of visiting the Old Town (just like with any major city, really). You could check out Google for places to eat but try not to plan which ones you go to, simply allow yourself to happen upon the on you choose.

In reality, the best rated ones online are simply the ones that are more modern and that use digital signage at their restaurants. If you allow yourself to happen upon a cafe or restaurant, you can pick one that doesn’t have a massive queue, and/or is not full. 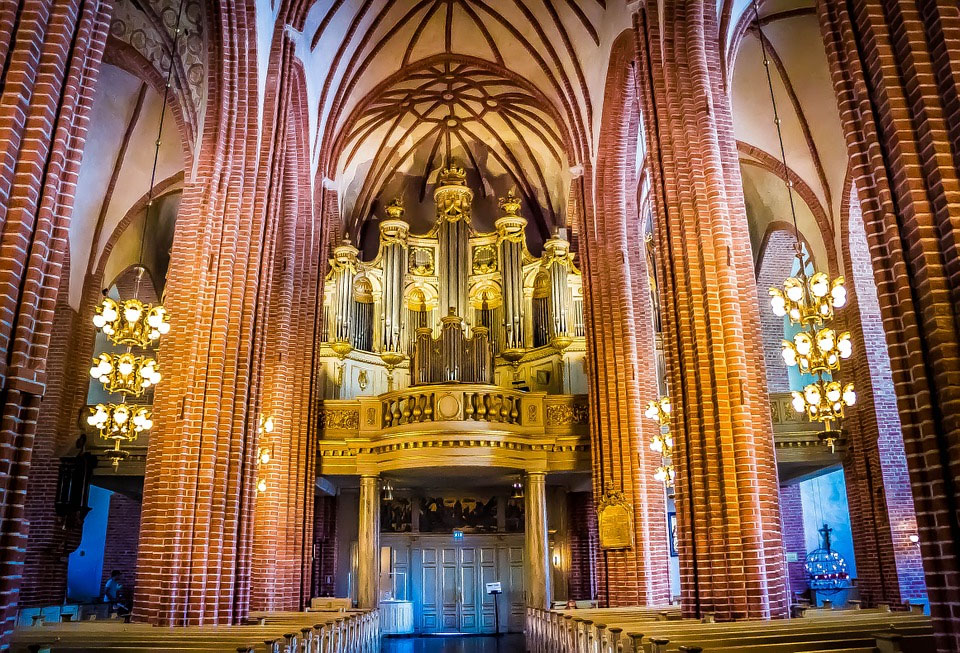 The oldest church in Stockholm opens after 10am in the morning, so do not make it the first place to visit on your list. It looks very unimpressive from the outside and it is only when you get inside that you can appreciate the architecture, sculptures, and other decorative items including the original St. George and Dragon statue and the Vädersolstavlan, a painting with one of the earliest images of Stockholm (1535).

Storkykan was originally built in the 13th century but was updated and remodeled in the 18th century as religions changed in the country. The cathedral currently serves as the seat of the Bishop of Stockholm within the Church of Sweden and has been since 1942 during the creation of the Diocese of Stockholm. It has been the seat and center of hundreds of historic events over the years including coronations, royal weddings and state funerals. 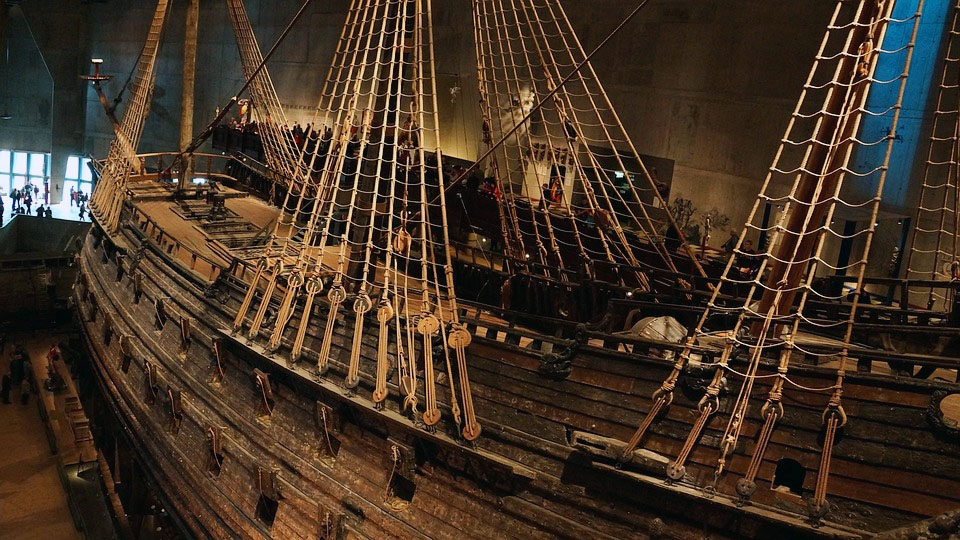 Many people are not aware that Sweden used to be a major European power with a formidable navy and army. As one of the most famous maritime museums in the world, the Vasamuseet showcases some of that marvelous naval history.

Its prime exhibition is the Vasa, a 17th century warship that sunk on its maiden voyage in 1628. Well, in reality, it couldn’t be called a voyage as it sank within a few minutes of its launch. Raised and reassembled, visitors can view it from six different levels although sadly, you aren’t allowed on board. The story of the ship is told from many angles throughout the museum. 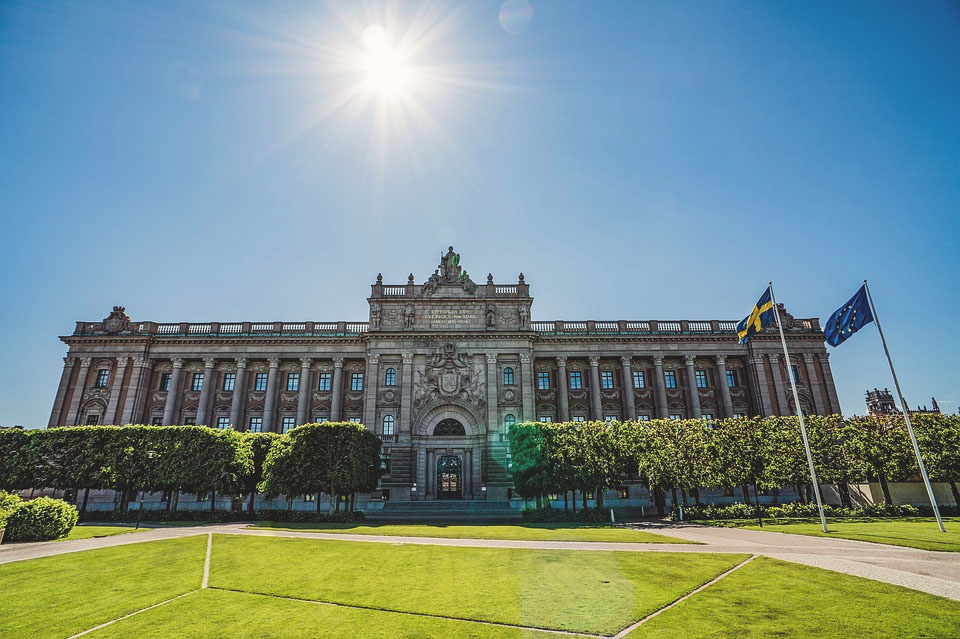 If you weren’t aware, Stockholm is built on fourteen islands. One of the smallest islands – Helgeandsholmen –  is home to the Riksdaghuset, the Swedish Parliament. Occupying about half the land area of the island, the building was constructed between 1897 and 1905 – although parliamentary principles didn’t come into full force in Sweden until 1917.

The designer for the parliament building was chosen in a competition in 1889. Aron Johannson’s design is Neoclassical with a Neo-Baroque façade and two Neoclassical wings. Corinthian columns are a major feature as is a large glass gallery in the main hall from where visitors can watch parliamentary proceedings.

Visitors can take a guided tour that lasts about an hour and for photographers, the building presents many different aspects from various viewpoints around the Old Town.

Although translated into English as the Royal Armory, the Livrustkammaren is so much more. The museum holds a collection of more than 30,000 items all associated with the Swedish monarchy from King Gustav Vasa  in 1523 to the current royal family.

Separate halls are dedicated to the royal arsenal, the royal wardrobe and the royal  carriages. Everything is beautifully presented with the scene setters and designers evoking as much history for each piece or tableau as they can.

Prime exhibits include Strieff, the preserved and stuffed horse that Gustav Adolphus rode in battles along with his apparel and armor and the masquerade costume worn by Gustav III in 1792 when he was assassinated at the opera house. 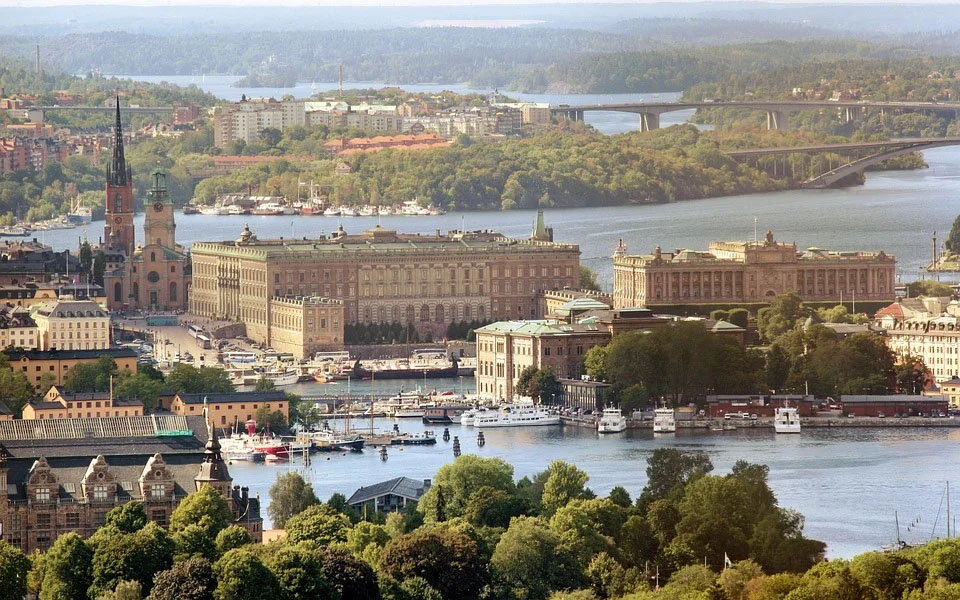 This is certainly one of the most popular parts of Stockholm’s old town and the palace is one of the largest in Europe. It remains the residence of the King of Sweden and holds many state functions.

Built on the same site as the medieval Tre Kronor Castle that was destroyed in a fire in the 17th century, the building is baroque and in the style of a Roman palace.

These buildings were created hundreds of years ago and yet artists were able to carve such detailed and intricate decorations that sit in a sea of other fine pieces of artwork. The walls, floors, ceilings, and objects are awash with over-indulged decadence to the point where it is impressive.

The palace has three museums – Gustav III’s Museum of Antiquities, the Treasury with the regalia on display when not in use, and the Tre Kronor Museum that focuses on the palace’s medieval history. You can also visit the Royal Chapel in the summer months and watch the changing of the guard ceremony.

These are the top places to visit, but the Old Town has some quirky stuff you shouldn’t miss too.

There are things you happen upon in Stockholm’s Old Town that will no-doubt get the most comments on your Facebook feed. For example, there is the “Famous” Järnpojken, a statue that is so small that people put coins next to it to take a photo, and then leave the coins. There is the Wooden Horse Museum, which is more of a shop full of small wooden horses.

There is the Jazzpuben Stampen, where the owners have stuffed their tiny pub with amazing ornamental designs, and a jazz musician group, even though the place is very small. There is the Royal Coin cabinet, which is exactly what is sounds like, the Trangt and Trevligt full of handmade jewelry, and there is a Thai Massage parlor run by English speaking people who specialize in foot massage because of all the people who walk in complaining about walking on cobblestones all day.

Charlie Svensson is a freelance writer. Having visited close to 60 countries, he writes mainly about travel. He has created several travel guides that focus on helping people make an informed decision when choosing where to travel.

View all posts by
Charlie Svensson
GET THE LATEST!
eNEWSLETTER
Subscribe Now!