I listened a lot about Punjab, India because in my neighborhood there is a Punjabi family I am friends with. I also have a lot of Indian friends who are always waiting for the holidays to go back to their homeland. Why are they so enthusiastic about their land? This question led me to travel to Punjab to explore the land of colors, love and a lot of interesting traditions you will be part of and won’t ever forget those moments! I’m sure of my words. I roamed around Punjab on Holi Festival and came back home, but my subconscious is still playing with the colors of Holi in Amritsar. To sum up, those memories are difficult but trying to disseminate my experiences to you as I write this.

To understand Holi, you must know it is one of the most famous festivals in India, but also celebrated around the globe primarily by Hindu communities. Th Holi Festival is based on the solstice signifying the arrival of spring and dates back to the 4th century. I had to travel and see people celebrate this event in different parts of Punjab, there was a two-day trip because I could only get four days off from work, and two would be for traveling and then have two-days for exploring Punjab. So travel with me as you read this. I started from Jammu and my first destination is Jalandhar.

A Road Drive to Jalandhar, My first Camp

As I left Jammu, India, two of my Indian friends met me to for our journey to Jalandhar. It is about 220 km and takes 4 hours to reach. It was 8am in the morning when we started our journey, my friends told me that the best is to set out as early as possible to avoid the traffic in a way. After traveling only 24 km, we stopped and tasted the tea at Thandi Khui, a famous sweets shop of the place serving traditional sweets with tea. After about 45 minutes we reached Lakhanpur, the spot where from the region of Jammu starts and leads to Kashmir. Lakhanpur’s Laddoo (A traditional sweet) is so famous of the spot, whenever come to this place, don’t miss these perks of your travel. We continued from Lakhanpur and reached Dasuya, a town of Hoshiarpur and had a perfect lunch with a lot of traditional homemade dishes at a friends place.

We reached at Jalandhar at 1pm and took the daybreak. Our final destination was the town of Jalandhar almost 22km away from the main city Nakodar. There is a shrine, named by Baba Murad Shah Ji. It is a peaceful place we reached there and experienced, finally, we are at our destination.

People from all the beliefs come to pay their gratitude to the tomb of Baba Murad Shah to give the message of peace and love. We were told by the local guide that the tomb was made in Muslims times. I could feel the warmth of the people, and a unique calmness because of the peacefulness of the shrine area. That was not Thursday, locals say that on Thursday, a number of visitors visit the place.

We visited the Wonderland Amusement Park in Jalandhar, in fact, it is at some distance from Jalandhar. The park divides in amusement and water parks when you go inside, you can bring your family and friends to have a wonderful experience to have fun in Jalandhar. We visited the water park first to enjoy in the wave pool, played with water, afterward in amusement parks, there are the boat sports, Cars ride and the food courts. I grabbed the yummy fries from the place to share with my friends.

Following all the activities, now we had to get something to eat in Jalandhar. The option for having the traditional food in a traditional environment was at Ranga Punjab Haveli where we settled for some time and had a wonderful Punjabi food along with gazing the art antique pieces representing Punjabi culture. We then departed to reach to the Chawinda, the famous village of Jalandhar where the aunt of one of our friends was waiting for us. From there we had to leave early for Amritsar.

The Day in Glamorous Amritsar 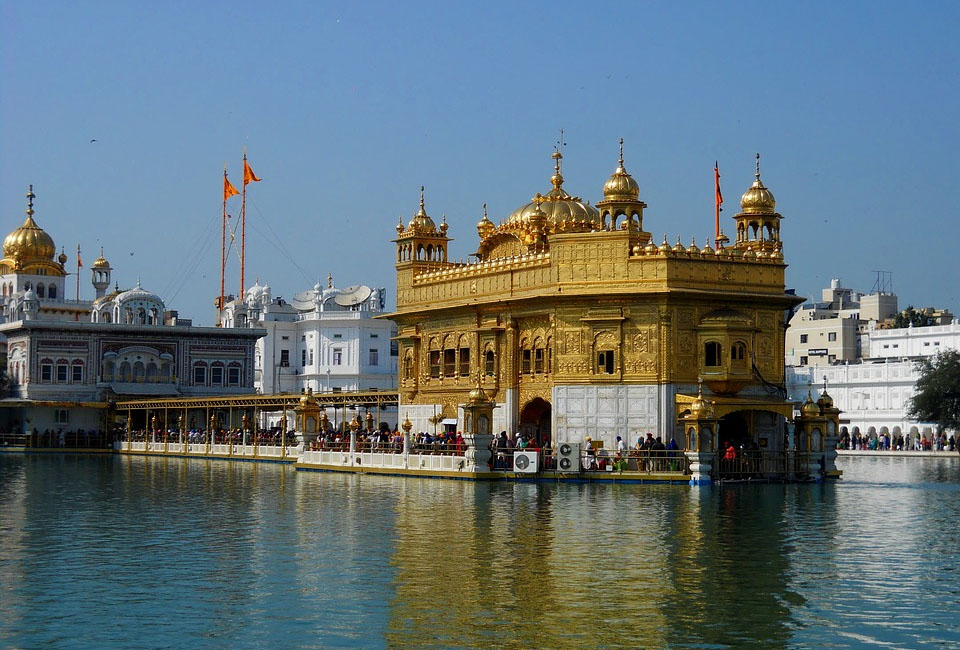 After seeking fun and a lot of exploration in Chawinda village, We continued our trip to Amritsar, We got on our place in Jalandhar from where we headed towards Amritsar. Amritsar is not so far, about 90 km distance takes an hour and a half to take you there. We left at 8 in the morning from Jalandhar and reached the beautiful city of Amritsar at almost 10, exactly I was waiting to get since so long. We booked a room there to place our luggage and get fresh, and headed towards the most magnificent, the most famous Golden temple.

It was Holi, a festival of colors, so the temple, include the area of the temple were all crowded with men and women paying a visit on holy occasion. The temple has a unique architecture built at a level lower than the surrounding land level. The local guide told us that the temple has four huge gates to welcome the visitors from every walk of the life equally, the temple is a symbol of peace and love he quoted. We had something to eat from the nearby market, Choley kulcha is the famous thing to take in Amritsar. We took part in a Holi celebration in Amritsar in our friend’s place. We also wander in the old city, roamed in the rambling Bazaars of Amritsar and bought embroideries, a pair of shoe, also bought some presents for my family and friends.

At the end of the day my friends had to say goodbye to me because, in the night, I had to catch the flight from Amritsar International Airport which was a short drive from where we settled in the main city. My very short visit to Punjab has ended way too soon. I’m aiming to take yearly vacations and take a longer tour of the villages of Punjab. I missed the Lohri festival and Besakhi to celebrate. Punjab is so rich of its rituals and traditions, delights and warmth.