Emily Watt is a prominent writer who is dedicated to her work. She has been writing articles and academic masterpieces for students in need and her track record in these fields is excellent. If you are out there struggling to write your academic project, you can contact: CustomWriting.com/Write-My-Essay and request for her to be allocated your project.

View all posts by
Emily Watts
Bloggers Articles
Home >> Bloggers >> Things To Know The Next Time You Fly With Your Dog
June 21, 2018

Flying With a Dog

From all the pets people usually tame, the dog is considered to be man’s best friend. This is because it doubles up as a pet and a security guard and become a part of the family very easily.

Flying out of one place to another through airports is quite a difficult process due to security checks and other screening procedures involved.  This procedure is even more stringent if dog travel is involved, as you have to notify and seek its clearance from the airport for it to fly with you.

Flying with dogs is not just a matter of paying for its space but a policy issue specific to airlines. As a result, you should research well on the specific airline pet carrier policies to avoid last minute surprises. If you are planning to fly with your dog, here below are some crucial tips to read.

Some airlines like Southwest, Virginia America, Jet Blue, Frontier and US Airways do not allow dogs into their cargo Although the aforementioned airlines do not fly dogs, some only restrict specific breeds because some dogs with shortened airways experience more difficulties in breathing while onboard and especially while under stress.

Some of the dogs known to be oversensitive to climate changes are: Pekingeses, Bulldogs, Boston Terriers and Pugs. To avoid subjecting a dog to this stressful environment, owners are advised to put them in crates which can fit underneath seats. Nevertheless, the total weight of the dog and the crate should not exceed 20 pounds. 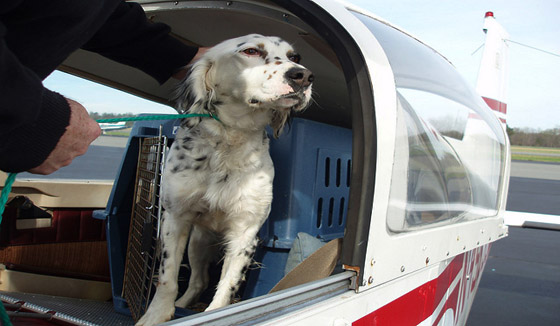 If you are allowed to fly with your dog in the same cabin, you should factor the size of your dog. Most airlines demand that the pet travel carrier must fit comfortably underneath the seats. Technically speaking, dogs over 15 pounds are not allowed in the cabin as its carrier would be huge and cannot fit well underneath. Only service dogs can be allowed in whether crated or not.

Although most dogs can comfortably fly with you, some barky ones or those with high anxiety levels suffer the most onboard and it is not worth the stress. Alternatively, if you are considering to travel with this kind of pet, you can train it in advance for it to get used. If that is not possible, then you can arrange with dog-sitters to look after your pet as you travel and pick it back upon returning.

Relatively, the cost of flying with your dog is Like in 2011, commercial flights charges were dependent on whether the pet is carried underneath a seat in the cabin or booked in as cargo due to specialized handling. For example, American United, and Delta were charging $125 one way ticket for dogs carried in the cabin while the cargo charge was $250 one way.

Apart from the size of a dog, there is a fixed number of dogs allowed in each cabin and this number depends on the class of the cabin. For instance, the American airline allows seven dogs in its cabin and to ensure your pet gets a space, you should call the airline in advance and pay for the slot.

United Airlines recently stated it is banning all puppies and kittens under 4-months. United also said is is banning all emotional-support animals that are not dogs and cats. However, Service animals which unlike emotional-support animals are trained to assist a qualified person with a disability are still accepted on flights as long as they are a dog, cat, or miniature horse according to the new policy. So leave the bird or snake at home.

Jetblue Airlines on the other hand carries 4 dogs in the cabin while Southwest carries 6 dogs in total. It’s one-way charges are affordable as they are $95. And unlike the Delta airline, even puppies under 8 weeks are allowed to fly. You can contact the airline for more information on its pet policy.

US Airways carries 6 dogs in the cabin but unfortunately, they do not allow pets in the cargo compartment.

Even if your airline has not demanded a health certificate for your dog from a veterinary, it is good to have one, just in case it is required. This certificate is important as it is a proof that your dog is safe to travel with people and has taken all the necessary vaccination shots.

Disclaimer: The rules for flying with animals are changing rapidly. Please check with your airline for the latest rules and restrictions.

Emily Watt is a prominent writer who is dedicated to her work. She has been writing articles and academic masterpieces for students in need and her track record in these fields is excellent. If you are out there struggling to write your academic project, you can contact: CustomWriting.com/Write-My-Essay and request for her to be allocated your project.

View all posts by
Emily Watts
GET THE LATEST!
eNEWSLETTER
Subscribe Now!