John Steinbeck had Charlie. I have LouLou, a north Texas rescue that a vet in Weatherford, Texas, put down as a blue heeler. She’s been my traveling companion for the last 3+ years. She really likes going to nudist places, because a lot of them have doggie parks where she can be off the leash, run, and do other doggie things, and because I seem to relax better nude.

LouLou and I went back to Faywood the day after Christmas. Some more recent history of Faywood: Several years after Elon and Wanda re-opened Faywood Hot Springs, Elon died. Wanda continued to run the place a couple of years while trying to sell it. On the website she said something like: “Elon’s dream was Faywood my dream was Elon and without Elon I am not inspired to stay.” So, the place was closed for about 6 years. Then Damon and his wife, who has now left both Damon and Faywood, bought it. He was, a successful owner of a John Deere dealership in Wyoming. He told me he had always dreamed of owning a campground, and was thrilled to find that this one came with a hot spring. With the help of many family members he had the place re-opened in about 3 months. Especially impressive after Faywood had had no maintenance for 6 years. I got there 3 weeks after the re-opening and pitched in on maintenance tasks part time. On most subsequent visits I’ve taken on some tasks. The last 3 years those tasks have been related to the creation of a clothing optional campground. 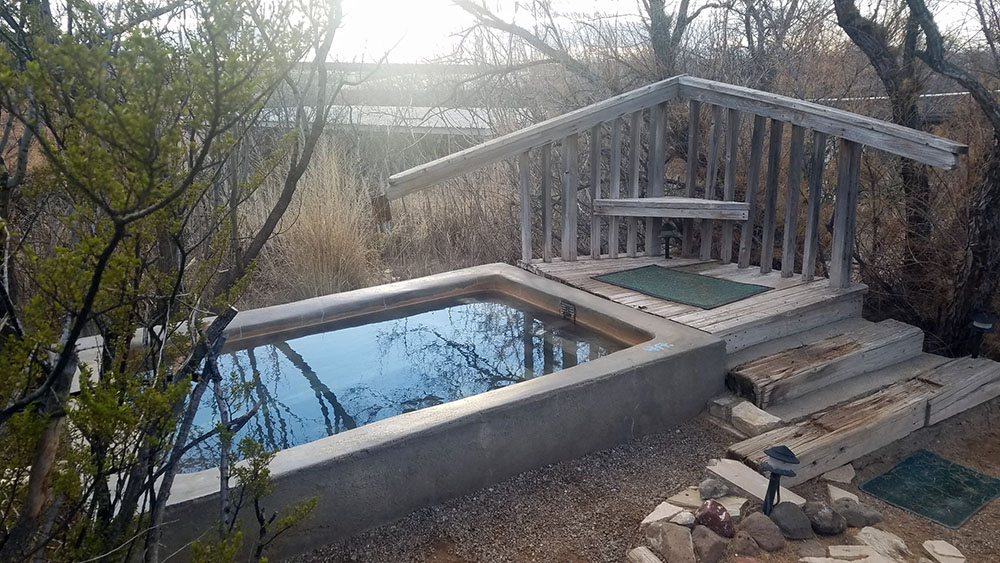 There are now 5 soaking areas. My favorite area is the completely outdoor clothing optional pools. This picture above shows the hot pool (around 103 F) in the morning of a rare desert snowstorm. In the same area there is a very hot pool (around 106), a cool pool, and a foot wash. I’ve been there before when it has snowed, but only enough to dust the ground with white. This storm dropped around 6 inches of wet snow, snow good for a snow man or some snowballs. A woman who is a permanent resident rolled up a soccer ball in snow. Her dog, who believes he owns the ball, attacked the snow to get at the ball. 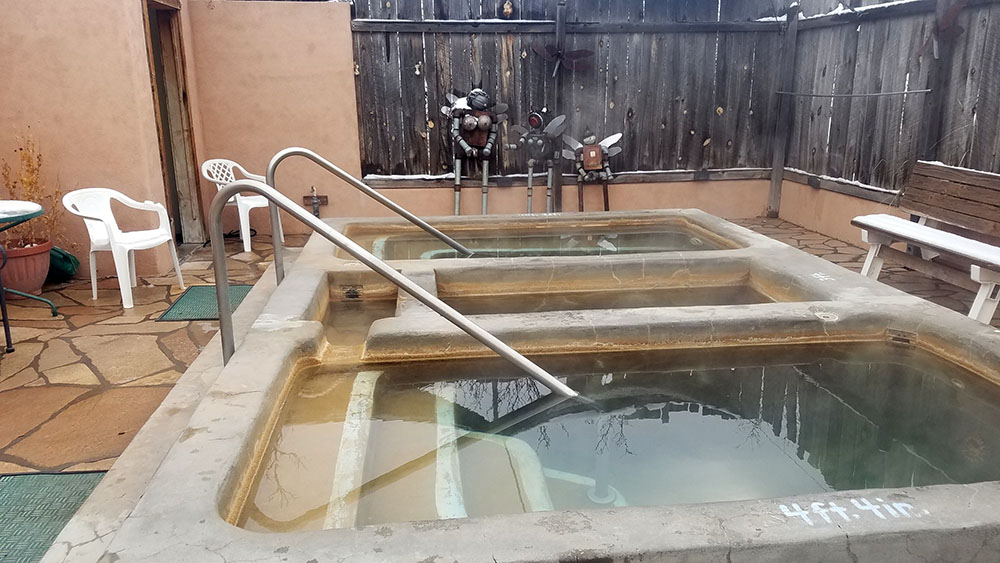 There is an outdoor clothing required area, much like the clothing required with hot, very hot, and cool pools. There is also a fenced in soaking area with the same four pools. Former owner Elon did a lot of metal art. For this soaking area had made an anatomically correct family—mother, father, daughter, son, dog, and cat—out of welded scrap metal. Years ago, the dog and cat disappeared. I didn’t ask what has happened to the father. The fourth soaking area is a set of about 10 private pools, which can be rented by the hour, and you get one complimentary hour for each night you rent a cabin. A fifth area has one large pool, called Watsu II. Elon and Wanda put it in to provide a type of water massage. I don’t think that ever took hold, but now Watsu II can be rented for private parties of up to 25 people.

For a snowy day it was rather warm, between 34 and 38. LouLou and I hiked up to “Stonehenge” to enjoy the snowy panorama. And the weather didn’t scare folks away. There were still people in both campgrounds, still people in the pools, and people just playing in the snow. In November we got a pop-up. Before that I’ve done all weather in a tent, with one night in the Gila getting down to 4 degrees, but in cold weather I always camp near a hot spring, so if it gets really bad, I retreat to the hot water. Again, Faywood Hot Springs is 24 miles north of I-10 between Deming and Silver City, NM.