Nudists Run (or Walk) in a Nude5K at Oaklake Trails

John Steinbeck had Charlie. I have LouLou, a north Texas rescue that a vet in Weatherford, Texas, put down as a blue heeler. She’s been my traveling companion for the last 5+ years. She really likes going to nudist places, because a lot of them have places where she can be off the leash, run, and do other doggie things, and because I seem to relax better nude.

What Do Nudists Do? We Run, or Walk, Nude 5Ks.
In AANR-SW (The Southwest Region of the American Association for Nude Recreation) we do this five times a year: twice at Star Ranch Nudist Resort near Austin; once each at Wildwood Nudist Resort and Bluebonnet northwest of Fort Worth and at Oaklake Trails Naturist Park between Oklahoma City and Tulsa.

LouLou and I made it to Oaklake Trails. My travel vehicle for years, a 2002 Explorer, had a violent death this past week, so we borrowed my daughter’s Prius, put in a backpacking tent and off we went on the coldest May day I remember in south Texas and Oklahoma. On the way we took a toll road around Austin, where we had an “is this unique to Texas?” moment. When we got into a highway construction zone the speed limit plummeted from 80 to 70. It was nice to discover that the gas price at Buc-ees had dropped back to $2.29. Just like at Star Ranch, it rained all Friday night, with temps in the 40’s. In preparation for a couple of backpacking trips in June and July, I had Lou with me in the tent overnight instead of in a car that’s not mine. It went pretty well except about 4 times Lou woke me with a cold nose and a warm, wet tongue to make sure I remembered how much she loves me.

The rain stopped around 6 a.m., I’ve had a great omelet and hash brown breakfast, and now I have the laptop set up in the heated clubhouse. At 10 a.m., it’s now up to 53 degrees: not bad if you’re in the far north, but around here we’re normally worried it will be too hot to run. Lou and I just checked out part of the trail, with her running wind sprints while I walked. It’s soggy—lots of chances to slip and fall. And so I did, but only once during the 1st kilometer. I guess I’m a mudder—I moved up from 4th out of four to 3rd out of four, and OLT had really great medals for the first three in each age category. OLT had the grills going and provided dogs and burgers after the race.

I camped next to an interesting couple. I was not zeroed in on looking for stories, so I didn’t ask if I could use even their first names. Being something of a Superman fan, I’ll call them Clark and Lois. They came down from a state with a border with Canada. He is really into being nude. It was chilly, and though I had no pants, I was wearing a couple of shirts, while Clark had only shoes. 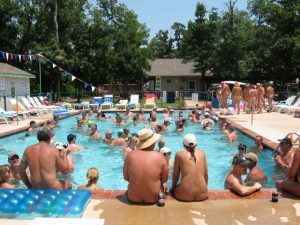 Lois, bundled up, told me she came because of Clark. Friday evening at a meet and greet in the new, huge clubhouse, I was sitting with them. Clark said he was going for the hot tub and invited Lois to join him. She told me that Clark might be there for hours (it was more like 15 minutes) and repeated that she was just there for him. Saturday, whenever I saw her until after lunch and the awards, she was fully dressed. Then I little while before I left, I put my feet and legs into the hot tub. (I had a basal cell carcinoma removed from my lower back a couple of days before. The dermatologist told me I could sit on the side and drink.) There was Lois, naked in the water. When I saw her a little after that I said, hey, you were in the hot tub. She said, “And I got out! This was a big step for me.” Another example of someone pushing a little past previous limits on her freedom.

The relatively new office manager, Darren, let us in on Friday after closing time. As prearranged, I phoned and he opened the gate, and told me to meet him at the office. I arrived a minute before him, but there he came down the road, wearing just shoes. He maintained the same dress throughout the weekend. The previous office manager, Dennis, used to dress the same, though Brenda, one of the owners, told me he sometimes put on a shirt if it was cold in the office. Those of us from the southwest are a little surprised when we go into clubs around the country where the office staff is fully clothed, particularly clubs which tell members and guests that they are expected to be nude except for reasons of weather or health.

“At an AANR board meeting a few years ago, someone said that office staff at a nudist resort should be dressed because it was a business. I said that it depends on what business you’re in.”

At an AANR board meeting a few years ago, someone said that office staff at a nudist resort should be dressed because it was a business. I said that it depends on what business you’re in. Everybody laughed and I lost the floor before I could explain what I meant. I meant that our business, the business of every nudist resort, club, or organization, revolves around an idea, the idea that clothes are unnatural, being naked is natural. If I worked in a store whose business was selling 3-piece suits, I’d definitely wear a 3-piece suit (after I bought one from the store). But we’re not selling some product. We’re selling an idea, a belief, a way of life, a style of living, and we should dress appropriate to that idea.

3 thoughts on “What Do Nudists Really Do? Part 12”