What Do Nudists Do?

John Steinbeck had Charlie. I have LouLou, a north Texas rescue that a vet in Weatherford, Texas, put down as a blue heeler. She’s been my traveling companion for the last 6 years. She really likes going to nudist places, because a lot of them have doggie parks where she can be off the leash, run, and do other doggie things, and because I seem to relax better nude. LouLou didn’t make this trip. She’s wonderful, but I can’t imagine Southwest Airlines recognizing her as a service dog. 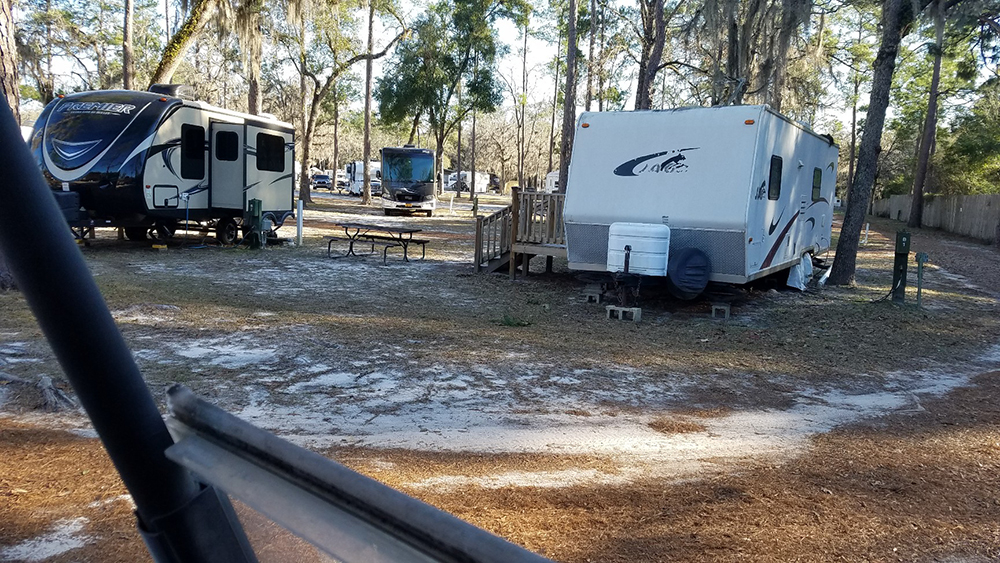 We Meet in Florida in the Winter

What do nudists do? In February, I attended the Midwinter Board Meeting of The American Association for Nude Recreation (AANR) at Suwannee Valley Nudist Resort in North Florida. If that river sounds familiar, the street name is Stephen Foster Drive. It was beautiful there, though I thought I’d freeze my bare buns. In North Florida, I’d imagined the weather would be warmer. Monday of that week in San Antonio it reached 84 degrees, but when I got on the plane Thursday morning it was 32. Not much warmer at Suwannee River, in the 30s in the mornings though a couple of days it got to near 70 with beautiful sun. Not much controversy this meeting, though several times we debated some motion at length, before voting for it unanimously.

The main highlight was the club and its owners, Tom and B.G. They’ve not been in business long, but they’ve been in business well. Tom is a Navy Vet, and they take service to veterans very seriously. In a nearby town there is a center for vets. They feed the center 7 times a year, and 7 times a year they feed the town’s fire fighters. Their liaison at the vet center mentioned that something these vets really need is dental care. VA doesn’t cover dental care, so Tom and B.J. started a program to provide the vets with free dental care. They have spent over $100,000 of their own money on this, they’ve raised money from others, and as of this date the program has expanded to 9 counties. B.G. said that when they arrive at the vets’ center with a meal they are greeted with such things as, “Hey, here are the naked people.”

Adjacent to the Resort is the Famous Suwannee River

The club has 30 acres, most of which are woods, with a nature trail. Tom told me that when they have filled the developed area they will quit growing. He doesn’t want to destroy what is basically a nature preserve. The club has won the AANR greatest growth award 2 of the last 3 years.

During the meetings one presentation was by Ramon Maury who has lobbied for AANR in Florida since 1985. He had this simple suggestion: People outside AANR don’t really know what is meant by landed and non-landed clubs. He suggests that we use the tourism industry vocabulary and call the landed clubs, “Destination Resorts.”

A challenge Ramon had for regions is, are we in touch with the state tourism organization of each of our states? The official Florida tourism materials and website prominently display a section for nude recreation. For me that means I need to get in gear to contact the state tourism offices in Texas, Oklahoma, and Louisiana. As for the fourth state in my Region, Arkansas, it’s against a 1957 law even to talk about getting naked. For Arkansas, I encourage nudists on vacation to send a post card from wherever you’re enjoying being nude to the Arkansas Dept. of Parks and Tourism, 1 Capitol Mall 4a 900, Little Rock, AR 72201. Tell them how much you’re enjoying nude recreation in another state, and how much you’d enjoy being natural in the so-called “Natural State,” if it were legal.

Ramon also referred to a study which showed that the overall economic effect of nudist destinations in Florida is 7.2 billion dollars per year. That’s probably greater than the impact in any other 3 states combined, but it is a useful number to use if you’re having a conversation with a member of city council, county council, or state legislature.

A topic discussed, near and dear to my heart, was the upcoming 2020 AANR Convention at Star Ranch Nudist Resort in McDade, TX, August 10-15. Here’s what you need to be doing. First, make plans to be there. You don’t even need to be afraid you’ll have to attend boring meetings. Star will have fun activities even when the meetings are happening. This could have two effects. One, the meetings may be shorter because we want to get out to the fun activities. Two, we might even find a way to make the meetings more attracting. I’ll be there several days early. I like to settle in and have time to meet new people before the organized events start. Go to www.StarRanch.net for more info.

Tim Mullins for AANR West
Interview with AANR President, Kathy Watzel
Interview with AANR Executive Director Erich Schuttauf
What Does AANR Do For Us?
We use cookies on our website to give you the most relevant experience by remembering your preferences and repeat visits. By clicking “Accept”, you consent to the use of ALL the cookies.
.
Cookie SettingsAccept
Manage consent