John Steinbeck had Charlie. I have LouLou, a north Texas rescue that a vet in Weatherford, Texas, put down as a blue heeler. She’s been my traveling companion for the last 4+ years. She really likes going to nudist places, because a lot of them have doggie parks where she can be off the leash, run, and do other doggie things, and because I seem to relax better nude.

Yes, nudists really do attend meetings where they work to promote and protect family social nudism.

Yes, nudists really do attend meetings where they work to promote and protect family social nudism. A couple of weekends ago LouLou and I went back to Star Ranch, 30 miles east of Austin, for the mid-winter Board meeting of AANR-SW (the Southwest Region of the American Association for Nude Recreation). On the way we stopped at Buc-ees at the north end of New Braunfels. Buc-ees is a travel plaza on steroids. For years there was a single store on I-10 between Houston and San Antonio. Along with gas it included the biggest convenience store I’d ever seen. It seems that almost suddenly there are Buc-ees all over south and east Texas, and one opened outside Birmingham, AL this past week. Some of these dwarf the original store. There are hundreds of gas pumps, and it is my impression that the New Braunfels store is about the size of two football fields laid end to end. You can buy furniture, many kinds of food for takeout or dining in, clothing, including, of course, cowboy hats, barbeque grills, and lots of other things. And they have huge, very clean bathrooms. They are the epitome of crass commercialism. While my daughter calls them, “Everything that’s wrong with America,” I stop there for the bathrooms, occasionally for some food or coffee, and always for the gas. For some reason they don’t post their gas prices, but they’re always lower than nearby stations. This time regular unleaded was $1.79, while nearby stations posted $1.84 or $1.85. (Note to my California friends. I left California many years ago after spending 17 years there. I left to get away from smog. Now I might also leave to get away from high gas prices.) Some numbers regarding Buc-ees size: the San Antonio Express News reported that the Buc-ees near Birmingham has 124 gas pumps and 50,000 sq. ft. of shopping. 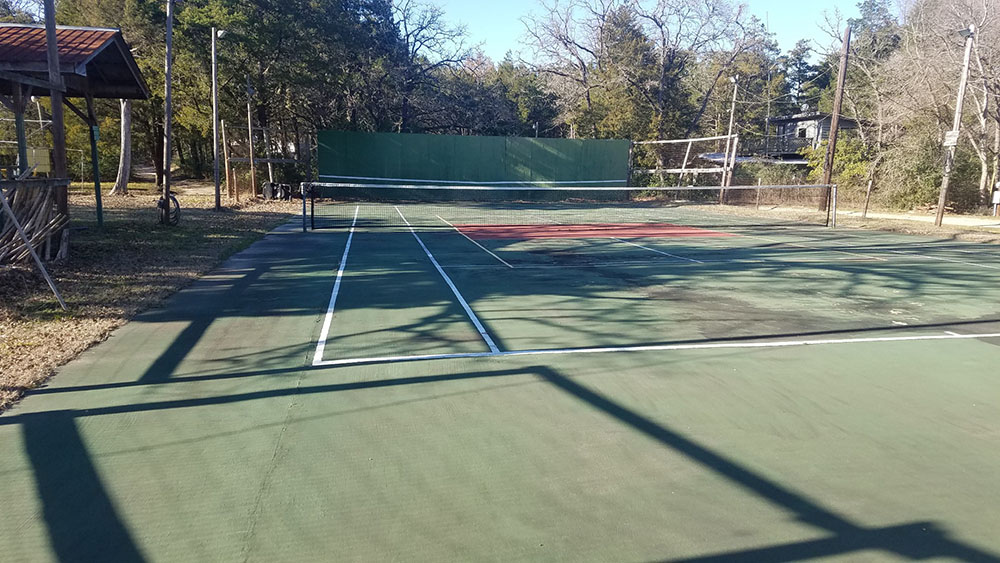 On to Star Ranch Nudist Resort! Even with my quite limited backing up skills, I maneuvered the pop-up into a tent site. The tent sites have lots of trees, while the normal trailer and RV sites are more out in the open, though they do have a lot more grass. Lou and I went for a walk and run (LouLou only for the running) in a hayfield. In the evening Board members and others were treated with wine and great finger food. During the Saturday meeting we heard committee reports, discussed our direction, and approved a 2019 budget. I’m not on the Board, but I’m expected to attend because I represent the Southwest region of AANR international, and I’m chair of the Planning and Goals Committee. Star Ranch has a sign in the office which says not to take pictures. I interpreted that to mean not to take pictures which include naked people. The weather was cold (for Central Texas) and there was nobody in the outdoor pool, no one hanging out at the tiki bar, no one playing tennis or petanque or horseshoes or washers or water volleyball or sand volleyball or shuffleboard or ping pong. There wasn’t even anyone using the indoor pool table or dart board. So, I am able to include pictures of those parts of Star Ranch. I had hoped to include a picture of the heated indoor pool and hot tub, without people. But something else nudists really do is hop in the hot tub after a Board meeting. I understand that the policy of this blog says no showing of the wonderful natural parts that indicate male or female, and no showing faces. So, the folks in the hot tub and pool agreed temporarily to face away. The heated indoor pool is used daily, year-round, for water aerobics and other exercises—I was surprised how much resistance you get when moving 1-pound Styrofoam bar bells through water. 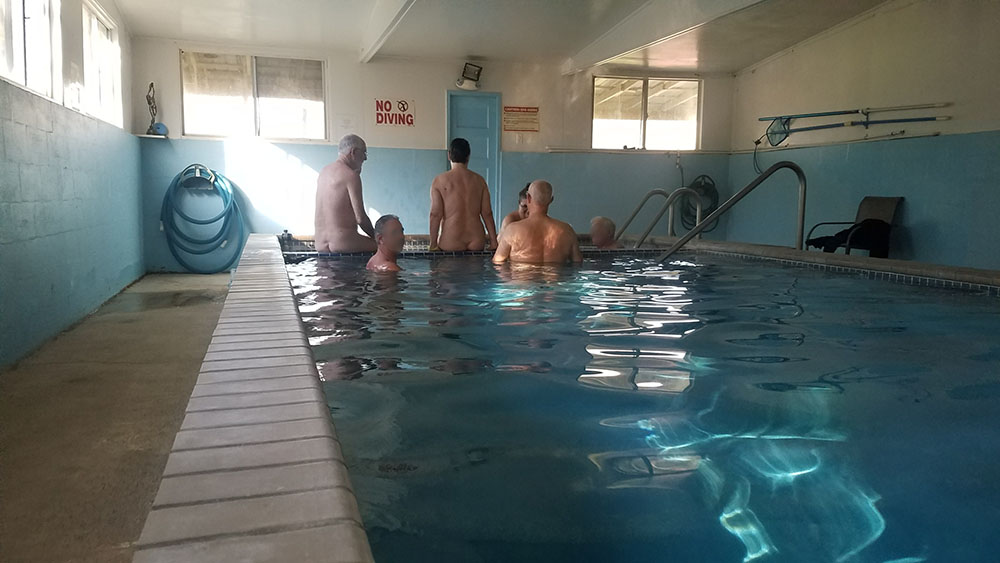 Another sort of highlight for this visit. On one of our walks to the hayfield Lou and I passed a donkey, which followed us to the hayfield and then followed us as we returned, sometimes really close. Up close and personal, Donkeys look a lot bigger than the videos we see of burro rides in the Grand Canyon, with Ferde Grofe music in the background. Lou has been around lots of animals in the neighborhood and in the wild. This is the first time I’ve seen her frightened by another animal. I reported the donkey at the office. They told me that the donkey slips out of the ranch next door and that John the owner, had been called, and they call the donkey John the Ass. The also told me they think John the Ass is lonely and comes over wanting to play. The next morning I met a guy with a horse trailer asking if I’d seen a donkey.

So, once again, if you’re in the Austin area any time of year, check out Star Ranch Nudist Resort. In addition to tent and RV sites, they have rooms in the club house and lots of cabins.

1 thought on “What Do Nudists Really Do? Part 7”