John Steinbeck had Charlie. I have LouLou, a north Texas rescue that a vet in Weatherford, Texas, put down as a blue heeler. She’s been my traveling companion for the last 7 years. She really likes going to nudist places, because a lot of them have doggie parks or other places where she can be off the leash, run, and do other doggie things, and because I seem to relax better nude.

What Do Nudists Really Do?

We run (or walk) five kilometers naked, or at least we used to. April 10 the Nude Racing Series of the Southwest Region of The American Association for Nude Recreation (AANR-SW) resumed. Our last race before that was in October of 2019, so, instead of having a 5-race series, we had a no-race non-series for 2020. The series continued Saturday, April 24, at Wildwood Nudist Resort near Decatur, TX. Wildwood is number 1 in the region for taking care of race participants, volunteers, and pretty much anybody who happens to be around. Star Ranch sells hamburgers and fries after the race. Bluebonnet and Oaklake Trails provide grilled hamburgers and hotdogs for free after the race. Wildwood served a high-carb meal Friday night for those of us who were staying overnight and whoever else happened to be around. Saturday morning, they provided a continental type breakfast. After the race they “only” gave us great potato salad, bread with pasta sauce, green beans, and 3 kinds of grilled, bar-b-que sausage. I say “only” because in pre-COVID days the club furnished several kinds of bar-b-que and members provided pot luck items, always an amazing feast. Cyril, who lives at Barehide Resort, about 34 miles south of Wildwood, brought ice cream cones, and secretly put them in the freezer. (Wildwood is one of several resorts in the region which has a kitchen open for use by guests as long as the camp staff isn’t using the whole kitchen. After the main course, Cyril asked one of the staff for ice cream. When told they didn’t have ice cream, he told them to check the freezer.

I met Cyril close to 20 years ago at Vista Grande Resort, where he was a permanent resident. When the resort deteriorated after the deaths (basically by old age) of the owners, Cyril moved to Armadillo, a few miles away. I moved my membership there, though it was a 253-mile drive one-way. I think Cyril was in every 5k at Vista Grande, Armadillo, Wildwood, and Bluebonnet since that time, and I assume he was doing them before I got involved.

Cyril Ayoub, born in Egypt and speaker of several languages, won his age category at Wildwood, being the only competitor in the 90-94 age group. 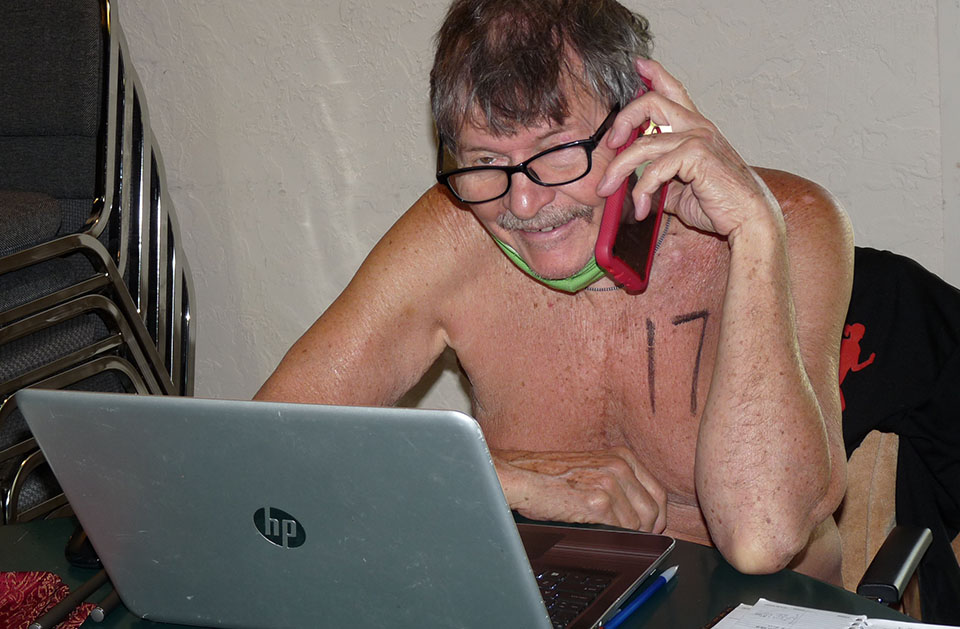 After saying something really erudite, like “Wow” I commented that she appeared to be very comfortable in her skin.

“It feels so comfortable. Everyone’s so nice. It rubs off on you.”

She said she’s been a little anxious inside, but that the place and people made her feel so comfortable. “It feels so comfortable. Everyone’s so nice. It rubs off on you.” I asked her how she found out about it. She said she was just looking online for 5k’s, and until she saw the bit about this race, she had no idea there was such a thing as nude racing or that there was such a thing as nudist resorts in such a conservative area. She said she’s never even been a back yard nudist. My preparation for races involves mostly streets in my neighborhood. She said she didn’t just need to prepare to run; she needed to prepare to run naked, to see how that feels. She put a treadmill in her garage where she could get the feel of running naked. She soon decided that a jog bra was in order, but other than that and shoes, she got the feel of what race day would be like. “It is comfortable, something I may just have to do from now on.” She said she also looked up nude racing on Reddit, and read reviews that said things like: “It wasn’t weird or sexual, just fun and relaxed.” And that finished selling Amanda on trying the experience.

Around the dinner table a former winner of the over-all prize for women for the whole series explained how the series awards work. Amanda was very interested in that. We get points based on our times related to the time of the over-all winner, who gets a 100. Whoever has the highest sum of his or her best three scores gets a series prize, for over-all or for age group. I’ve gotten some series prizes for age group. The only thing I was ever first overall was for the number of times I fell on a wet, slippery trail at Oaklake Trails.

I have never met a more interesting first timer.

Author’s note: I never include any information about other individuals in these articles without their specific approval. Also, there is an official way to communicate with authors of these blogs. With my lack of tech savvy, I’m not particularly good at accessing these communications.

What Do Nudists Really Do? Part 17
What Do Nudists Really Do? Part 13
Interview with AANR President, Kathy Watzel
When is a Nude Beach Not a Nude Beach?
We use cookies on our website to give you the most relevant experience by remembering your preferences and repeat visits. By clicking “Accept”, you consent to the use of ALL the cookies.
.
Cookie SettingsAccept
Manage consent