The weekend is here! This time it was all the more special since my mother-in-law was in town and we had to think of a place that has something new to offer and can be enjoyed by her. So as usual, scouting for a nice getaway deal or a day trip away from Mumbai’s hustle bustle is a huge task. For years Mumbai has needed a truly world class amusement park. And our wish was fulfilled with Adlabs Imagica Mumbai. This brand new international standard entertainment destination opened its doors in April 2013. Though it’s still in the making and will take some more time for completion, Imagica has garnered great reviews ever since it opened doors. Since it opened, I have been wanting to go and see what it has to offer. I’m glad I remained patient and waited for this time to come wherein we all could go as a family and enjoy!

Adlabs Imagica is a truly world class theme park, located along the Mumbai – Pune Expressway, about 20kms before Lonavala while traveling from Mumbai. Adlabs Imagica officially opened its doors on the 18th of April, 2013. The Theme Park has 21 major attractions/rides in total; out of which 16 are Already Operational. After My Experience at the Adlabs Imagica, on 21st-September Saturday, I would say it lives up to the hype and hoopla created in short span of time. The Park itself is divided into several zones; like Viva Europa, India, Asiana, Americana, Arabia and Jambo Africa. Each Zone has its own Specialty and has something unique to offer. In the “India” Zone, you would find attractions like, Mr India the Ride. In the “Americana” Zone, you will find Imagica’s Most Thrilling Rides and Roller Coasters. In Europe Zone, you would Victorian Style Lamp posts and Cobblestone Pathways. So, It’s pretty safe to say, Adlabs Imagica is India’s First True Theme Park. Most of the park is Wheel-Chair Friendly. 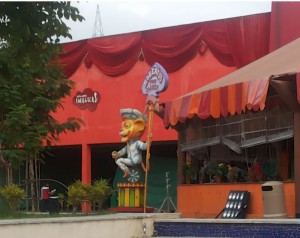 We traveled by car and took Mumbai – Khopoli route. With break at our favorite Mc Donald’s we managed to reach in 2 hours covering almost 75 kms to be precise with least difficulty with the help of Imagica’s signboards.

The amusement park has been divided in different zones, so you have Americana, Viva Europa, India, Arabia, Asiana and Jambo Africa. Americana being the one with the most dare-devil rides, whereas India and Arabia are super fun. Our agenda was to see as many thrilling attractions as possible first and then sit on rides. So we began our adventurous journey with attractions first coming on our way one after the other.

The I for India attraction is an aerial view of India’s geographical diversity that you watch on a giant screen while being suspended about 20 to 30 feet in the air. This one will probably prompt you to visit some of the places shown in the movie. It surely did to me and that’s how I decided on my next destination for the coming year – Leh/Ladakh… (Laughs)

Tip: Grab a seat in the center for a better view of the aerially-shot movie.

The Prince of The Dark Water attraction looks super cool from the outside, is essentially a 15-20 minute animated movie shown in an Imax Dome theater format. The animated movie is a about a mermaid trying to save her underwater world from an evil power-hungry merman. The graphics are decent, however, the story leaves much to be desired, the volume is too loud making it unclear to understand what is being said. This one’s mainly meant for kids who enjoy Hindi cartoons. 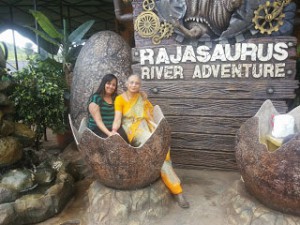 The Rajasaurus River Adventure is a water ride that is supposedly super fun and quite refreshing that translates you to the world of ferocious dinosaurs by riding this unnerving water boat adventure packed with sudden twists and ambush turns.

Salimgarh is a haunted house ride that is super fun and scary too. Again, the highlight of this place would be in the attention to detail. It involves riding through a tunnel, being witness to a sad love story and being creeped-out in some fun ways ending in a surprise element.

Wrath of the Gods is not a ride but rather an adventure of an archaeologist who discovers this cave when the three elements of nature (wind, fire, water) come alive. The decor is marvelous with stone carvings like those in Elephanta Caves. However, there is little else that impressed us.
Tip: Stand in the center of the main hall to avoid getting drenched due to the water works.

The Alibaba Aur Challis Chor attraction in Arabia is basically a shooting game. As you enter the place it’s beautifully decorated like you would expect a plush Arabian town to be. You sit in a four-seater trolley with attached laser guns with which you are supposed to shoot at fluorescent green lights located at numerous places throughout the ride. These florescent lights are placed on strategic places like on the bandit’s chest, animals, weapons, treasure chests, pots, etc. You win points accordingly depending on what you shoot.

What strikes you the most about this attraction is the attention to detail — the decor, the clothes of the thieves, the objects, the market place, etc. everything is designed in an authentic, impressive manner. Alibaba Aur Challis Chor is not a thrilling ride but sure was an absolute stress-buster ride for us.

Fortunately we finished all the attractions well within the time, thanks to Express ticket. Now the time was to scan some of the rides this place has to offer. Barring 3 of its most popular functional rides namely (Scream Machine, Gold Rush Express and D2 Dare 2 Drop), we sat on all the other major rides one after the other.

Gold Rush Express – Coaster drops from the height of 66 feet and send some speeding through tunnels and abandoned gold mines at a thrilling speed of 65 km/h) , we sat on all the other major rides. But those who don’t feel scared at all , they must sit on these rides at least once

The D2 Dare 2 Drop – the one with the dark blue scaffolding in the picture above) isn’t that scary as it seems and the ride barely lasts for 2-3 minutes. The anxiety waiting for the drop to happen drives you nuts and the few seconds when you reach the maximum height on the ride, you feel you’re in slow motion watching the entire landscape in front you. And with the drop, comes the adrenaline rush. Too bad this ride barely lasts a few minutes.

Nitro is a massive lengthy roller coaster ride which was under demonstration. This architectural marvel of sorts is still under construction, and thankfully I didn’t have to worry about my heart breaking out of my rib cage from the resulting rush and fear, had I sat on it. The ride is now operational.

While cruising around at Imagica, there are many people scattered all over the place to entertain the crowds and happily pose for pictures. For example there was a clown, cowboy, soldier, ginger bread man, etc. Having seen and sat on all the major attractions/rides now was the time to satisfy our hunger pangs.

For food , there are 5 restaurants serving different cuisines in Imagica — Red Bonnet American Diner, Zeze Bar + Grill, Roberto’s Food Coaster, Armada Tapas Bar and the Imagica Capital. We headed to the local restaurant offering Indian/Italian/Chinese menus to choose from.The best part here is that the actual food items are neatly displayed openly or in plates wrapped in cling film, giving you a clear idea of what the food items are, how they look and its quantity.

Overall, Imagica is a must-visit adventure park. It is something one-of -its-kind in India and by all means at par to international standards .The staff here is extremely good , well – spread , being well-trained, kind and helpful, which enhanced our experience at Imagica. Kudos to them. Though the tickets are priced on the higher side, we had a blast, leaving us super keen to visit again till more rides are completed and functional.

# Buy Express ticket. With an additional Rs 700 per person, one gets to avoid long queues to enter any attraction/ride.

# Check their websites for several offers which they run from time to time like family packs/college packs etc. Alternatively, touch base with agents who deal with Imagica tickets. At times they offer some discounts for group packages.

# Plan trip in such a way that you can stay till the end and enjoy evening shows as well.

# Carry umbrella/cap/sunglasses as it get too hot during afternoon. Even if u forgets either, there are enough stalls selling caps.

View all posts by
Shikha Bhangadia
GET THE LATEST!
eNEWSLETTER
Subscribe Now!